Case Study: How I Got Life-Changing Results With This Client 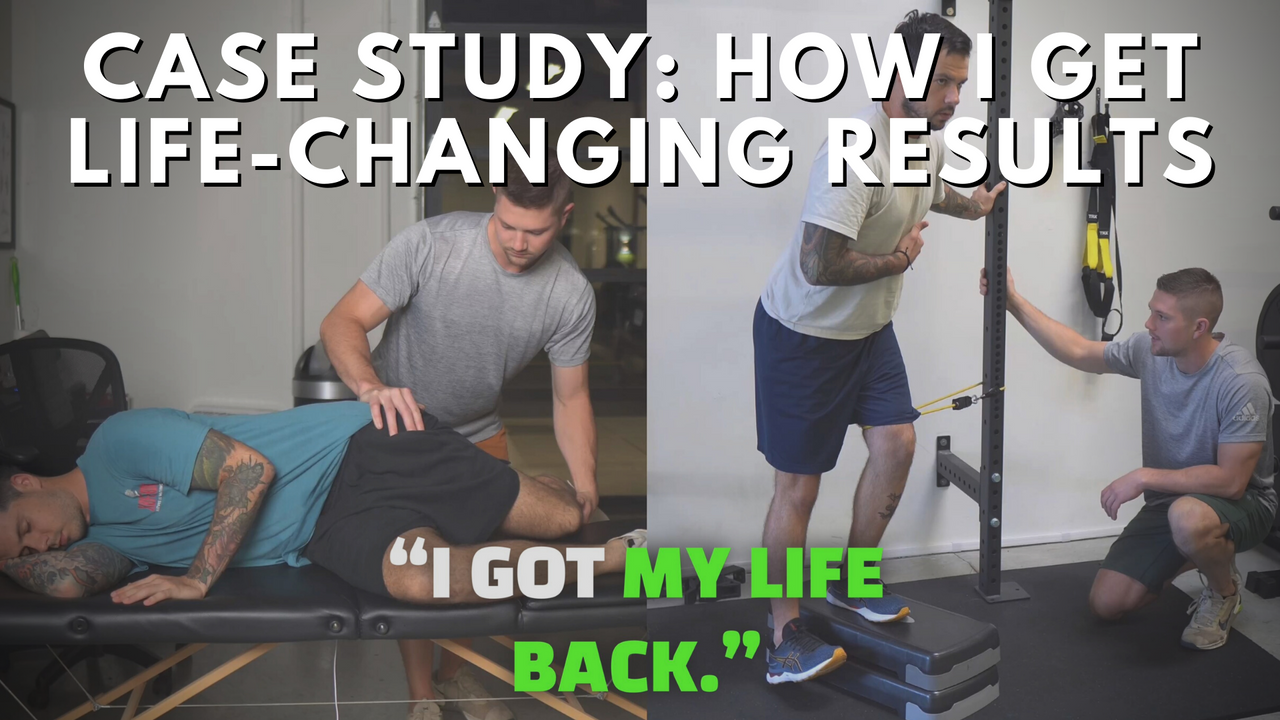 I’m excited to bring you this one today: An in-depth case study from start-to-finish and how I got results that led to this testimonial:

Much of my content pieces together different scenarios and individual problems, but this is going to show you a real-life scenario where someone is dealing with multiple issues.

Michael flew into Portland to work with me for a month. I was excited to work with him because he had a high amount of confidence that I was able to describe his underlying issues in the content of mine he’d watch before visiting me.

His primarily problems were:

I took him through the assessment protocol I discuss in my Biomechanics Course, and here were his initial results:

Ober’s Test: Fail on both sides (right side easier than left)

The goal here is to get his knee to the table without restriction. As you can see in the video, I can't really even get hip to drop even a little bit.

This test is assessing how “neutral” his pelvis is. If he is in too much anterior or posterior pelvic tilt, he won’t be able to pass this. I could tell he was in a good bit of anterior pelvic tilt, which is not inherently a bad thing, but more forward someone’s pelvis is, the more those TFL muscles gain leverage to be overactive.

This test is assessing how much internal rotation is available at his hips, especially his pelvic bones. Because he had less than 45 degrees on both sides, this tells me he has very little internal rotation. A 45 degree or less straight leg raise also indicates he has a lot of compression on the back side of his pelvis (this limits internal rotation), which helps explain his chronically tight glutes.

This test is assessing his ability to internally rotate his hips, especially at his femurs.

This test is assessing his ability to externally rotate his hips, especially at his femurs.

This test is assessing how well his upper body can turn to one side or the other. Both sides are tight, so this tells me he can’t turn well in either direction.

The result of these findings showed me that he had a good amount of tightness on both the front and backside of his body. His missing range of motion at his hips and shoulders will cause him to seek compensatory strategies at his spine. The general idea is that If we can’t rotate well through joints that are supposed to be mobile (i.e. shoulders and hips), our we will move through joints that are supposed to be more “stable” like our spine. This helps explain his low back stiffness – it’s being overused.

In Phase 1 and 2 of my progression model in my Biomechanics Course, my initial goals are to decompress the body on both sides and improve overall positioning of the pelvis and ribcage.

I like to start at the bigger structures of the body and work my way out from there in most cases. This means he can achieve:

#2: Improve his breathing strategy to decompress his ribcage.

This means he can get:

After our initial assessment, we used the following interventions to help improve those goals:

The goal of this was to introduce some gentle movement to get some dissociation between sides of his pelvis so he can decrease tightness and muscle tone throughout that area. This helped him be able to relax better in other exercises.

This exercise was extremely effective to help him re-educate his glutes to create hip extension and external rotation. The TFL muscles get overactive when the pelvis is stuck in anterior pelvic tilt (hip flexion) and internal rotation.

This exercise helped him gain control over his hamstrings controlling the tilt of his pelvis and improved his hip external rotation.

Not shown here are basic coaching of movement patterns like a squat, press, pull, etc.

At the end of our first session, we got some great changes you can see here:

As someone progresses through a program, my goal is for them to “hold onto their adaptations” we gave them through their repositioning drills. This means that Michael was able to walk into my gym without having done a drill in 6+ hours and he has the range of motion he gained from doing the drills earlier in the day.

The range of motion we wanted to improve at this point was his shoulder abduction. This was improved, but still not perfect.

We kept one of his drills still present while we added in a few progressions to help him begin to integrate different goals and joint positions together.

In Phase 3 of the progression model in my Biomechanics Course, I want to help him address his underlying asymmetry because at this point he has significantly less compression all over his body.

We used the following drills:

This exercise helps improve the positioning of the scapula on the ribcage. The long head of the triceps attaches on the scapula to help pull it back out of a winged stage.

We also began to load him more. Because Michael was a bit weary of loaded movements initially, we started with the basics with:

The upper body work was single arm because it helps improve rotation. Teaching better rowing mechanics with the emphasis on the elbow movement rather than the scapula being pulled back first was very important.

Because we have a semi-private model at my gym, I was sometimes busy with other clients and wasn't able to film everything. Not shown are:

At this point, things were looking really good and his symptoms were significantly decreasing. We progressed him to a new assessment, the HOPE test, that especially measures his ability to fully shift into one side of his body with all the appropriate joint and muscle actions.

If someone can genuinely pass this test, 99% of the time they feel way, way better.

There are 5 levels to this test. My goal for him was to be able to:

We used the following drills:

This helps him integrate the important muscles of left stance: The left adductor and glute med.

Unfortunately the video file for this exercise was corrupted, but I linked the walkthrough video of how I'd coach it above.

This helped him integrate all of the single leg stanc (internal rotation) muscles together in an upright manner.

By the end of the session, he was at a Level 3. He could get his hips off the table, but couldn't get much higher.

In the weightroom aspect of things, we progressed him to more loading and range of motion:

In Week 4 I want him leaving with confidence and the ability for him to train on his own.

I progressed his Foot Toward Foot to the following exercise which, surprise, looks pretty similar to the test itself.

This requires more integration of the muscles and joint positions needed for the test.

We also progressed him by the time he left with another upright progression working to keep him in left stance:

At this point, he was at a Level 4, meaning he could get his hips to the level of my shoulder:

We kept the weigh training fairly similar, but progressed load.

If you want to learn more about this, be sure to check out my Biomechanics Course, where I go over these concepts in a lot more detail. Because you stuck around to read this whole article, you can save 15% off of the main price with the code CASESTUDY15.

Click here to get the deal for the main program.

Click here to get the deal for the beginner program.