The PEC Pattern: How it Develops, How to Address it, & Relationships to the Left AIC 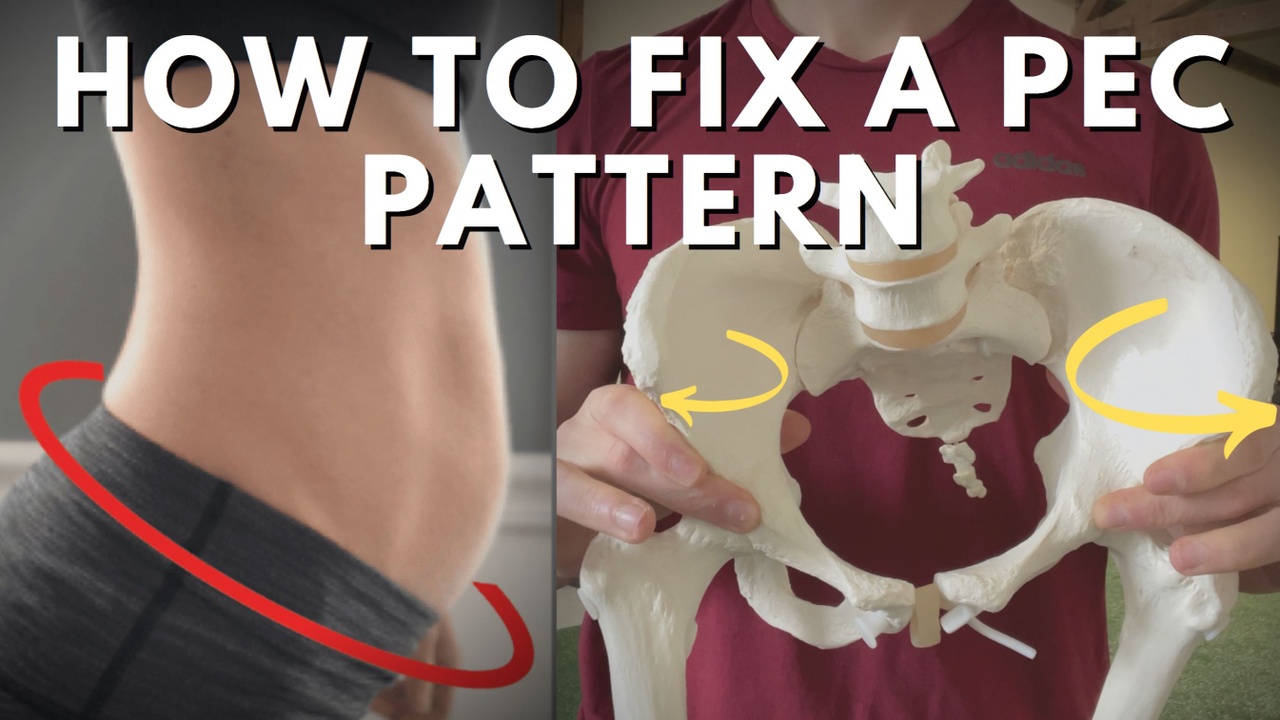 The Posterior Exterior Chain (PEC) pattern is a term that was developed by Postural Restoration Institute to describe an additional layer of compensation that is on top of a pre-existing Left AIC pattern.

This article is the third in the trifecta of my PRI-based content. For this article, I recommed that you have already read the following articles:

In this article, I am going to discuss:

How a PEC Develops

Let's first describe what the Posterior Exterior Chain is. It's essentially a chain of muscles that runs throughout your back which entail the: 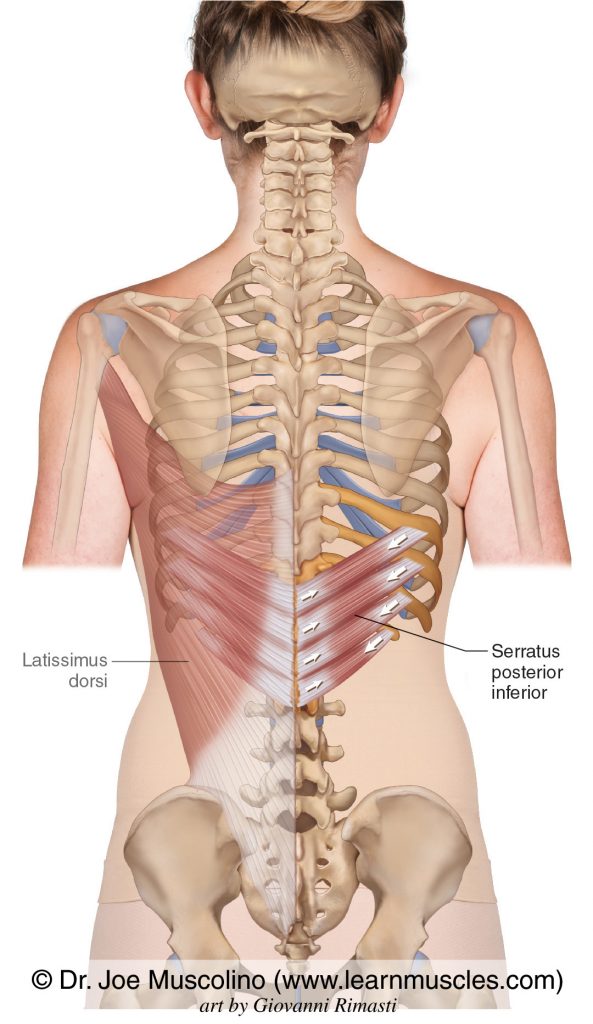 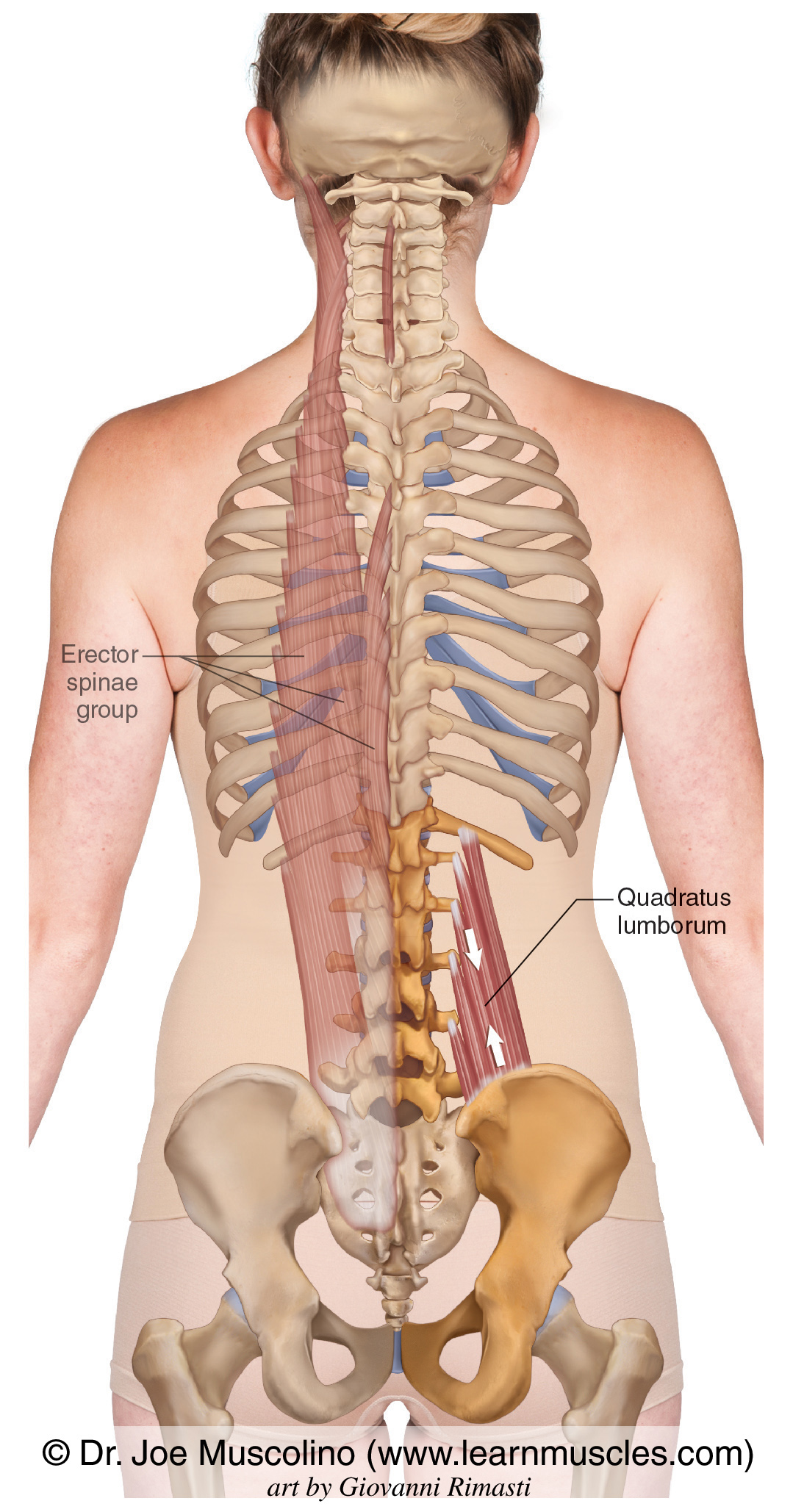 These muscles tend to be relatively larger muscles closer to the surface of our body.

When these muscles become "tight", they compress the back side of our body and "push" our pelvis forward on both sides in space, resulting in anterior pelvic tilt, or orientation of the pelvis forward in our center of mass.

The manner and timing in which an individual is going to move into a PEC pattern will vary depending on:

It's impossible to say without know the individual, but we do know that this PEC pattern is what many people tend to fall into. In my experience, most people are PECs and not Left AICs because a PEC pattern "pushes" us forward and tightens things up for stability, which are two things the body inherently wants. 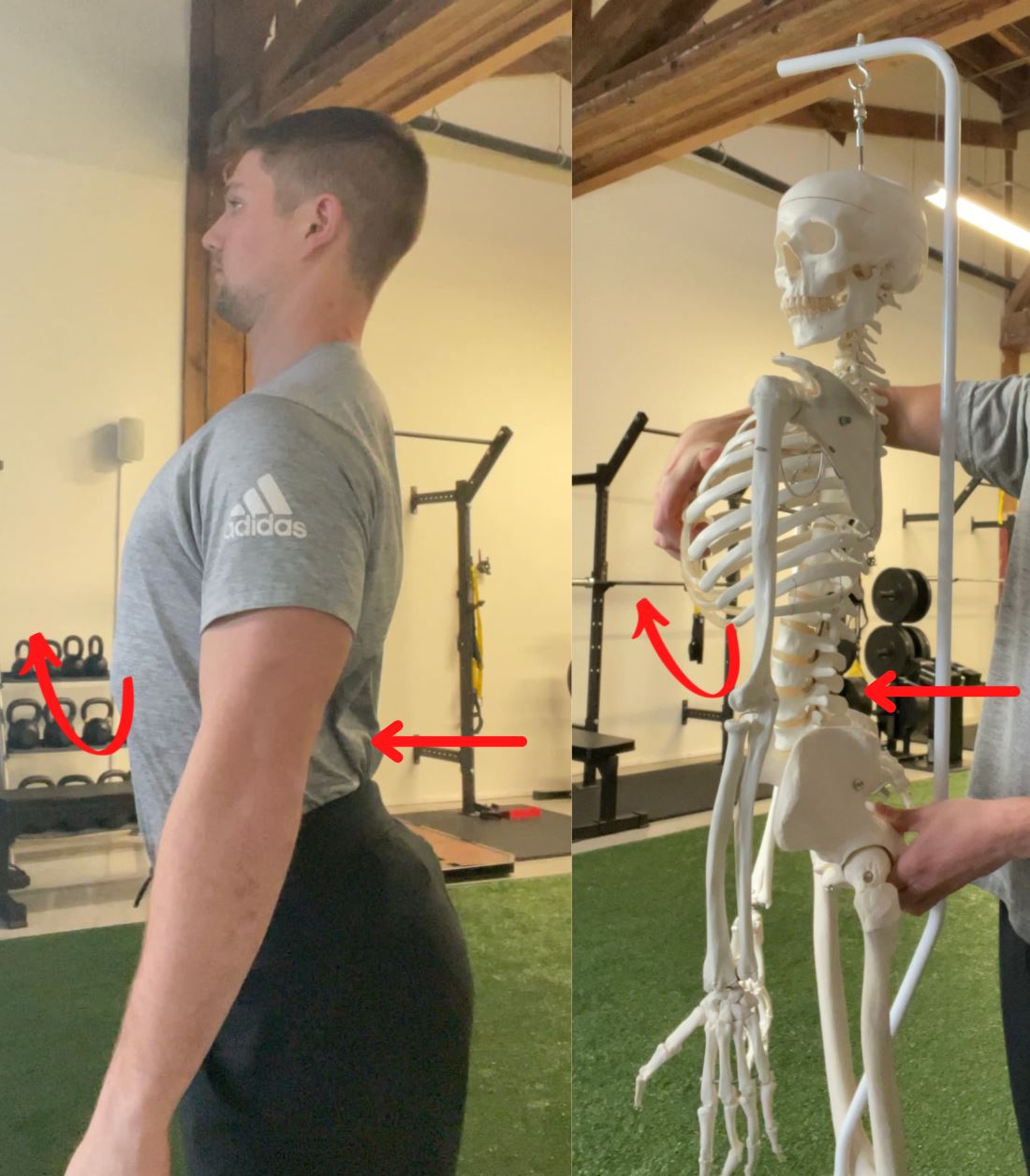 The key thing to keep in mind is that the PEC is an additional layer of compensation, so underneath every PEC is still a Left AIC. 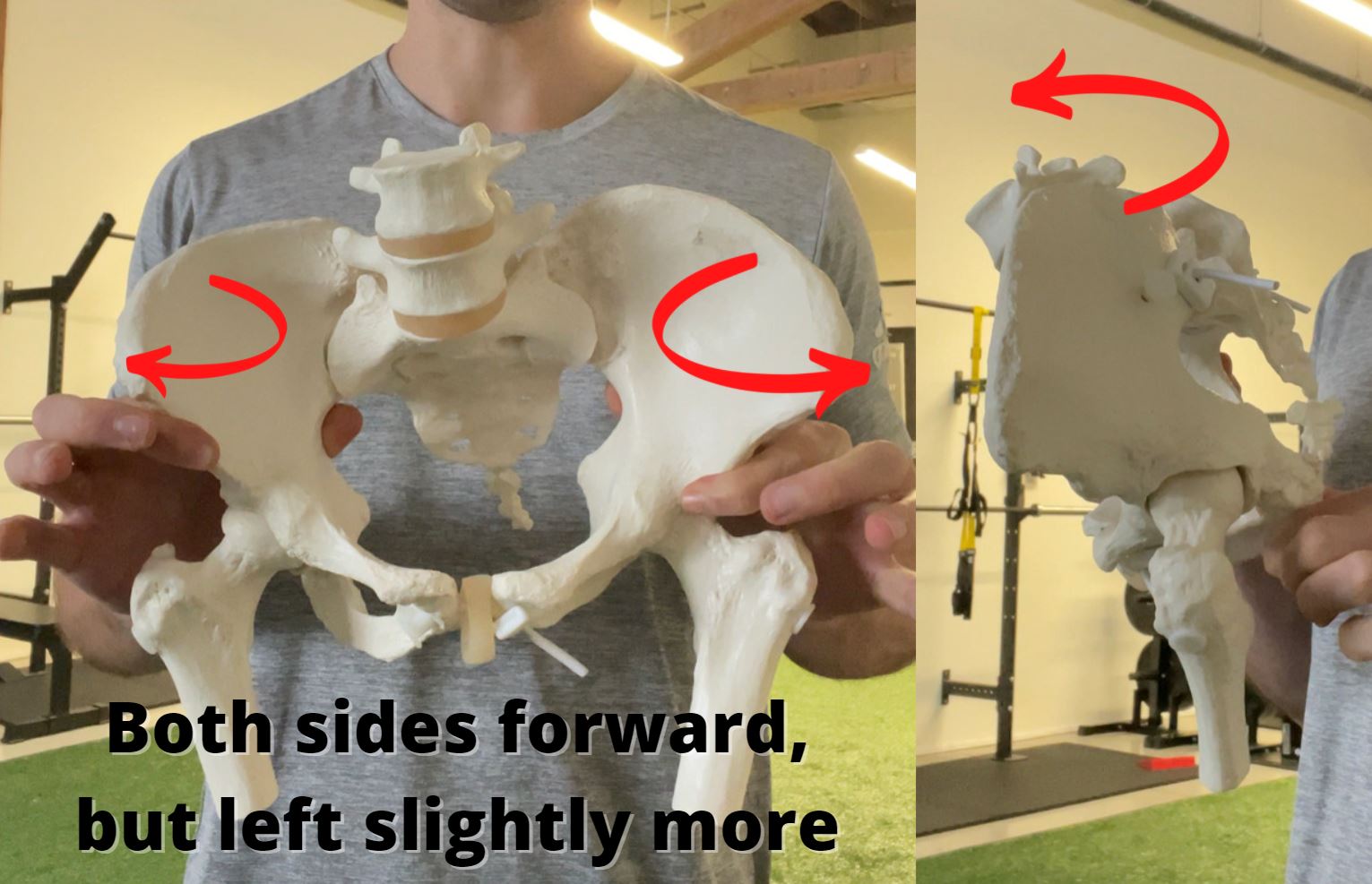 This will be very important for when we begin to address it and choose exercises. Because of that, the right side will often times have an easier side getting "out" of a PEC before the left.

Let's continue - These people have a diaphragm that is in a disadvantageous position due to their bilateral rib flare on both sides: 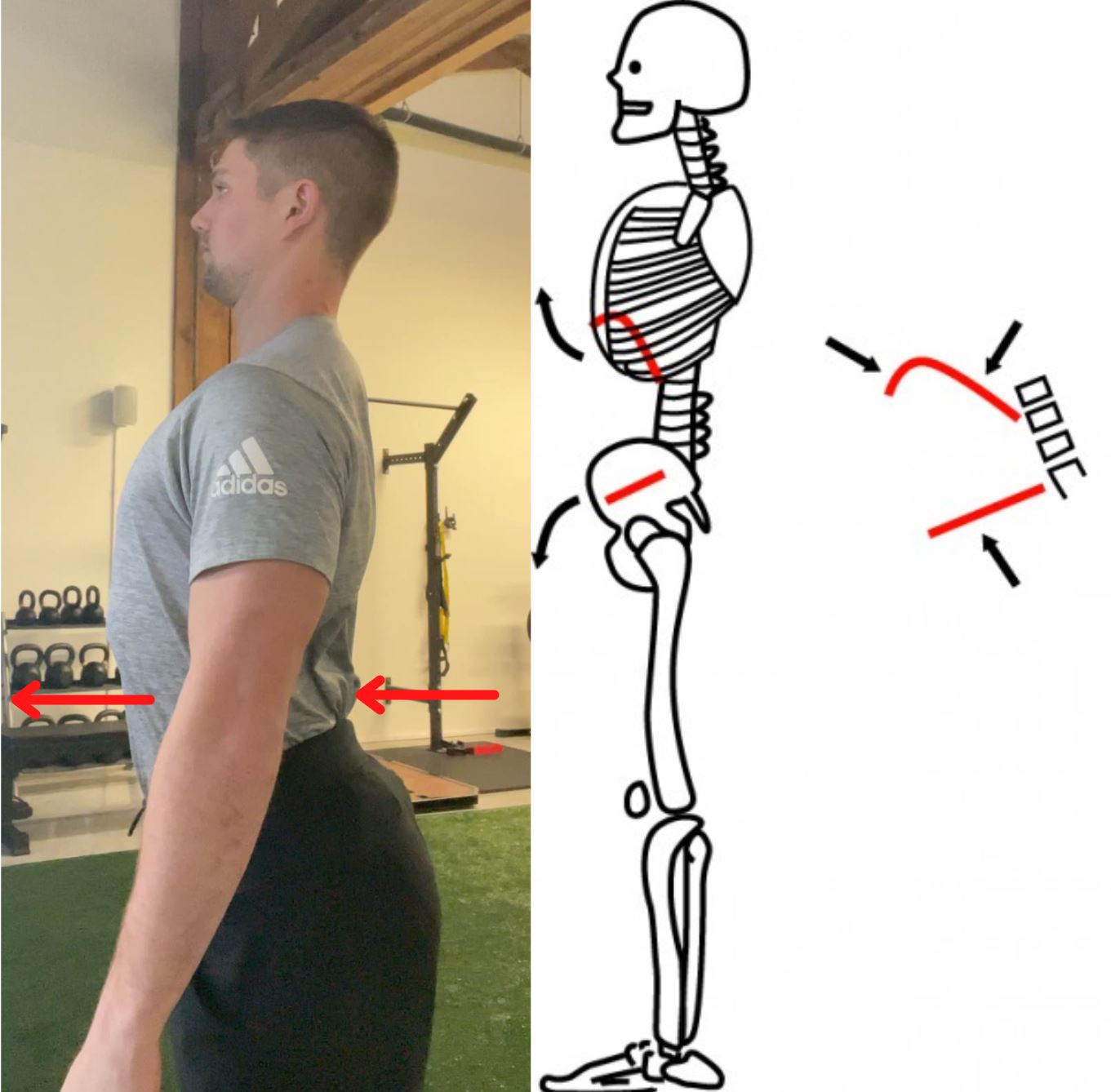 It cannot properly ascend or descend. It's essentially stuck in this "inhaled state":

they cannot expand their back because their posterior mediastinum, a huge cavity that should expand upon normal inhalation, is restricted because of the compression back there. 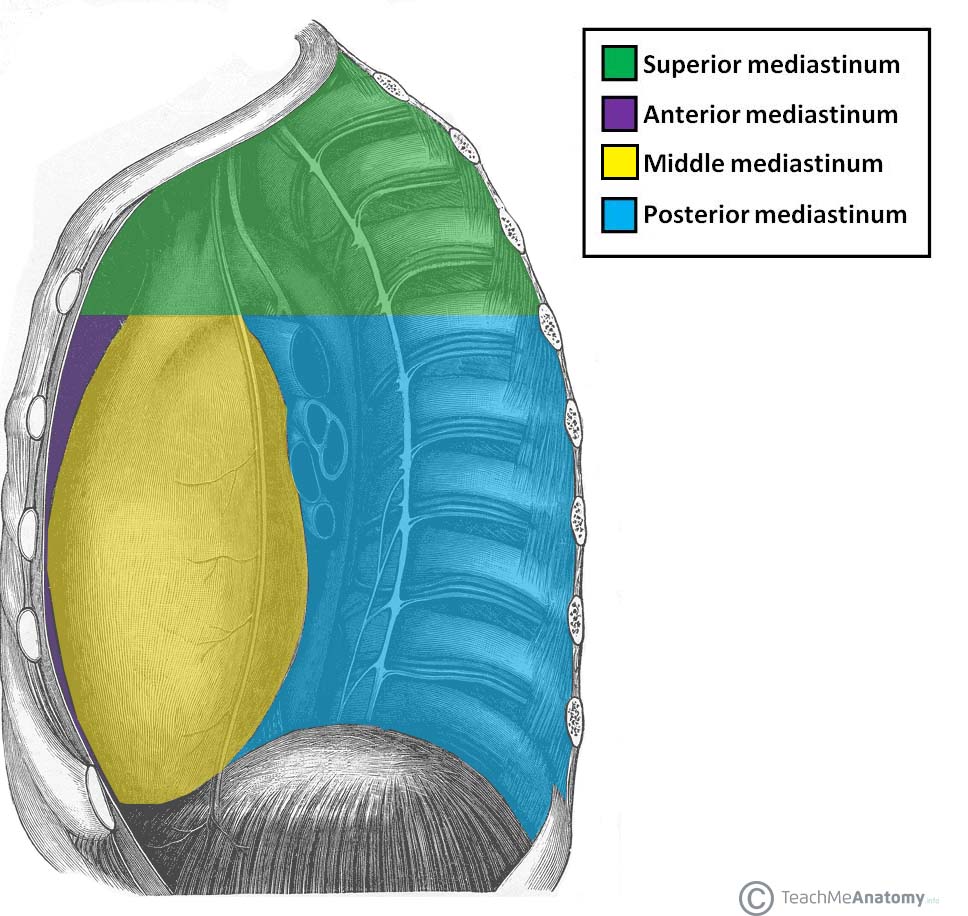 Now air is going pretty much entirely forward, primarily into the belly and low ribs. If we breathe thosands and thousands of times per day, air is aiding in pushing us forward every time we inhale. 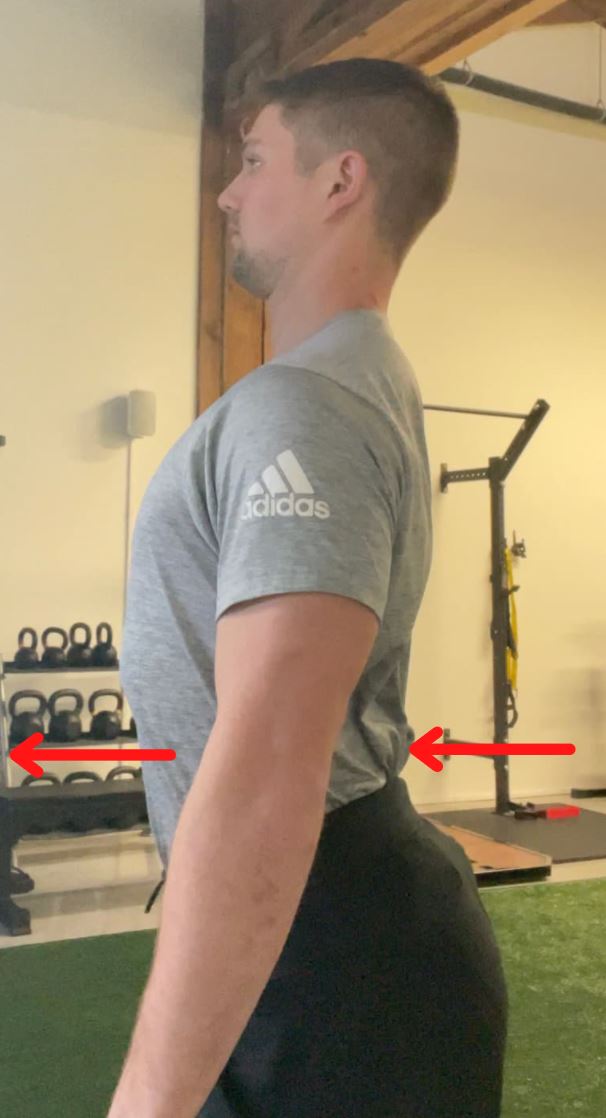 Extension tone is inherently tied to sympathetic nervous system, meaning that if we are chronically extended, our body is in "fight or flight" to some extent chronically as well. Try arching your back and getting really "tall" right now. You immediately feel more alert, but these muscles are now even more shortened. 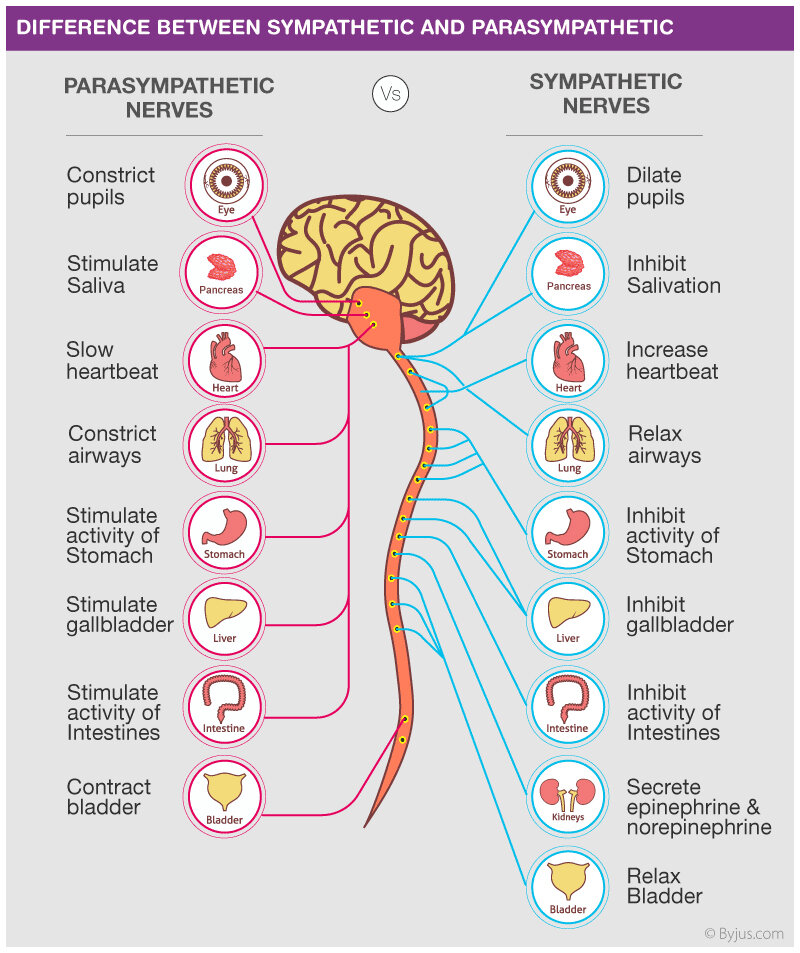 How to Assess for a PEC

The good news is, we can measure this to determinine objectively whether you are a PEC or not.

The primary measurements that will indicate someone is a PEC, or has this bilateral anterior pelvic orientation, are:

Ober's Test (Adduction Drop Test in PRI): They will not be able to fully adduct on either side.

Bodyweight Squat (Functional Squat Test in PRI): They will not be able to get below around parallel without "buttwinking" as I describe in the video.

Shoulder Flexion: They will be limited to around 90 degrees on both sides before a compensation occurs

The Patho-PEC pattern is essentially the final layer of compensation on top of a PEC pattern.

These individuals have a lot of extension tone within their body, but it's now to the point where they are going to need to find a strategy to become more mobile. So what to they do?

What they can do is create "laxity" within their soft tissues, such as certain muscles becoming chronically "stretched out" because of their disadvantageous position.

An example of this could be the hamstrings being chronically pulled on due to the anterior pelvic tilt. 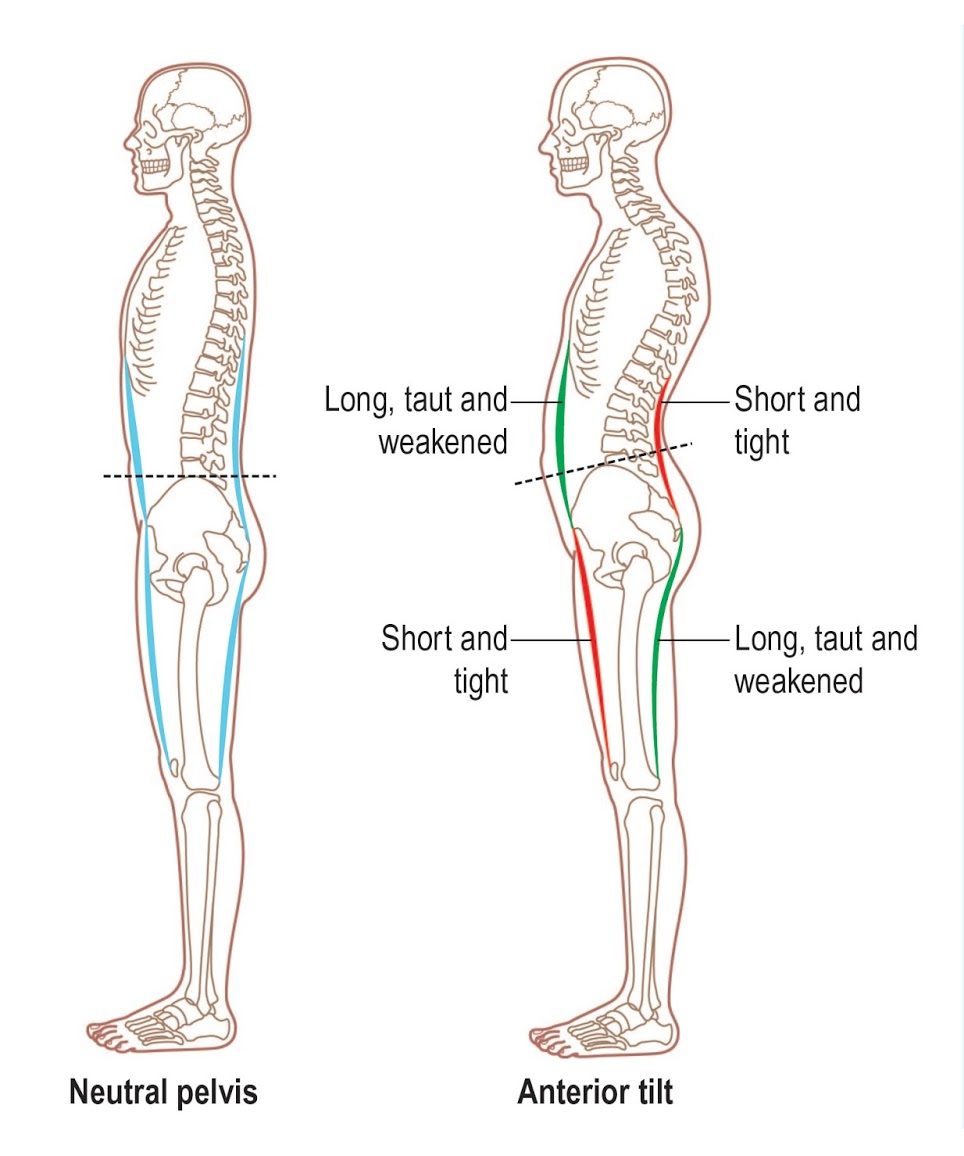 The point is, because of this chronic extension tone that is so significant, these individuals will present with measurements that do not line up with what we would expect for someone with so much compression and restriction in their system.

The two primary tests that will stand out are:

Squat Test: They will be able to squat very low, often times "ass-to-grass" in their bodyweight squat. 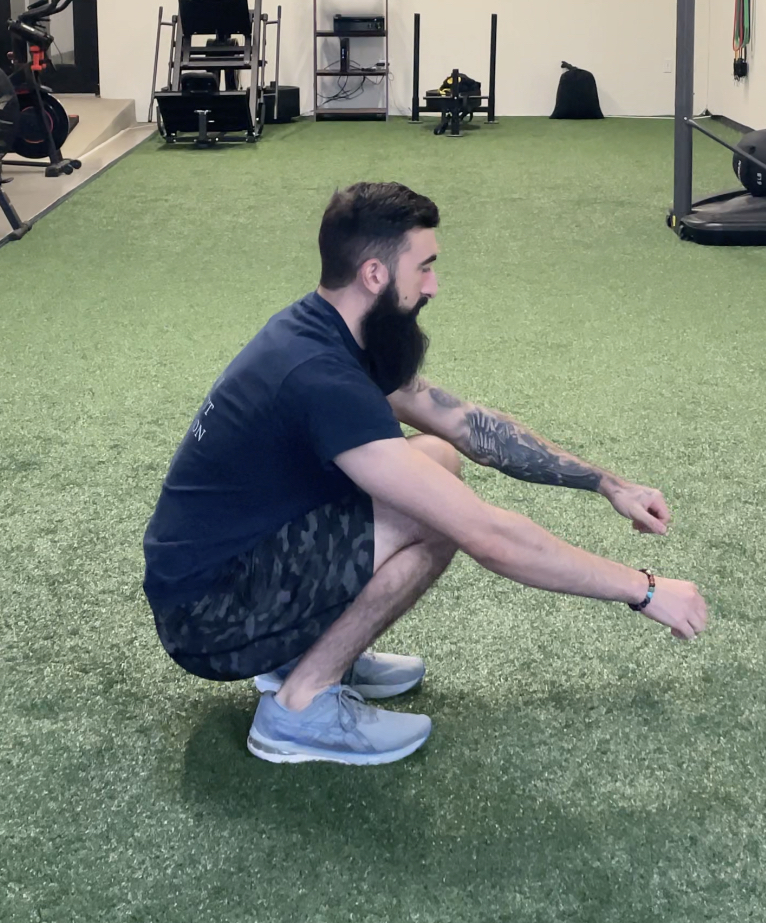 Toe-Touch: They will be able to palm the floor (or get very close to it) without seemingly much restriction. 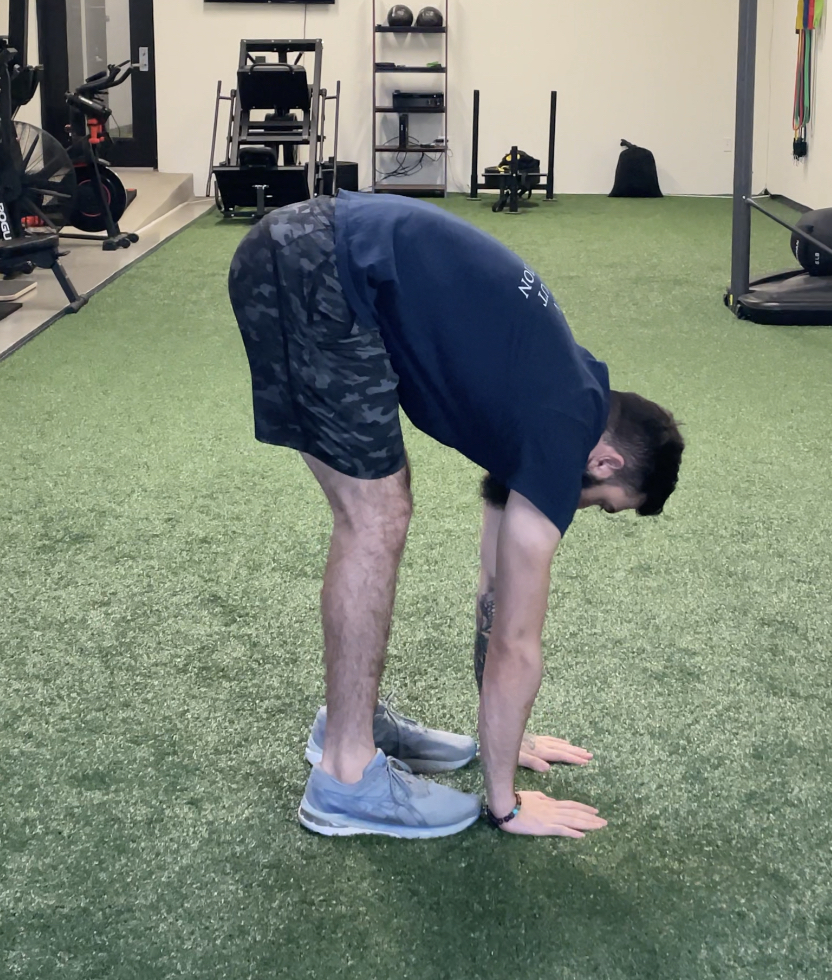 However, they will still fail their Ober's Test on both sides because laxity of soft tissues isn't going to make as much difference for them being able to move their pelvis and femurs in the orientation they need to for adduction and internal rotation.

How to Fix a PEC Pattern

In order to address a PEC pattern and restore a more "neutral" pelvic and ribcage position, we want to think more inhibit first rather than activation of their muscles.

They have already "activated" so many muscles in their body that they are getting more and more compressed as a whole. We do want to activate muscles, but it will be more effective once we down-regulate the tone of the extension muscles that are holding us in this PEC position.

Breathing is the name of the game here due to that aforementioned diaphragm position. We need to promote parasympathetic input into the system to allow for the down-regulation of those extension muscles while also providing the brain a sense of "safety" so that it can accept and adapt to these new positions over time and exposure.

If you want an easy tutorial on breathing and how to apply it to the exercises in this article, see below:

Here are some effective exercises:

Now that we have reduced some tone within the pelvis and ribcage, we can then improve hip extension which will also help us bring the pelvis back on both sides. Keep in mind that because there is this underlying Left AIC pattern, the right side will often times have an easier time regaining access to the full Ober's Test and hip internal rotation.

We will know this works when:

At this point, the pelvis and ribcage are now in positions that represent more of what we would expect from a Left AIC and Right BC pattern.

We can then use exercises from those articles (linked just above) to address the asymmetry and improve the ability to shift into the left hip (internal rotation) and push out of the right hip (external rotation).

How to Fix a Patho-PEC Pattern

With a Patho-PEC, things are a little bit different, but not overly so. These people need to learn how to use internal rotation and reference it earlier because they have so little of it.

They need lots of references at first because they can't manage internal rotation at all, and they're likely unable to manage gravity effectively in an upright position. Therefore, starting them on the ground with something like this would be ideal:

There are two main types of PECs (standard and patho), but both are additional layers of compensation built on top of the Left AIC pattern.

It may be hard to fully conceptualize right now, but unless your organs are flip-flopped upon birth (very rare), then everyone has this natural human asymmetry. These patterns are objectively identifiable and measurable.

It's first important to address this PEC pattern if it is present, because we will not be successful addressing the underlying pattern (Left AIC) if we don't address the additional layers of compensation built on top of them. It's like slicing through the layers of a cake - in order to get to the bottom-most layer, we need to cut through the top.