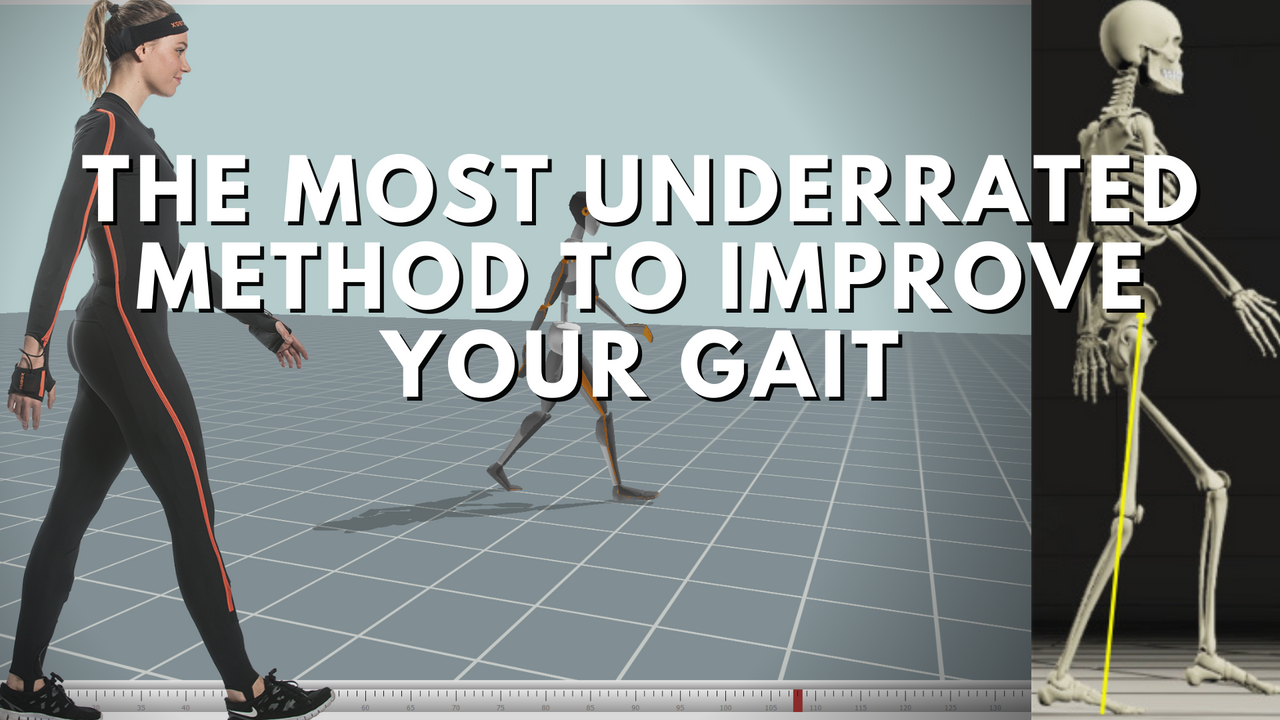 One of the best “corrective exercises” you can do is simply swing your arms more when you walk.

This is because arm swing is the key to extending your hip.

But maybe not for the reason you might think.

In this article, I am going to discuss:

The information in this post is inspired from Postural Restoration Institute called “Forward Locomotor Movement”.

Biomechanics of the Trunk in Gait

When we move forward in space, our arms are synchronized with the movement of our hips and lower body. How many people do we see on a daily basis that move like refrigerators with limited (or hardly any ay all) arm swing with short steps? A ton, if not the overwhelming majority.

Let’s first understand the role the trunk and arms play in the gait cycle, then we will layer on the fun neurological and visual aspects.

I cover this much more in detail in my Biomechanics Program, as well as additional exercises that relate to this course, but here is a general overview:

When we strike the ground with our heel, our arm is behind our body (extending) and we being loading weight onto that side.

The pelvis and scapula are in a position of external rotation. Now here is the key: One of the most important aspects of moving through the gait cycle is to delay the progression of the hip we are loading so the other one can begin to go forward, or else we would simply never be able to rotate from side-to-side. 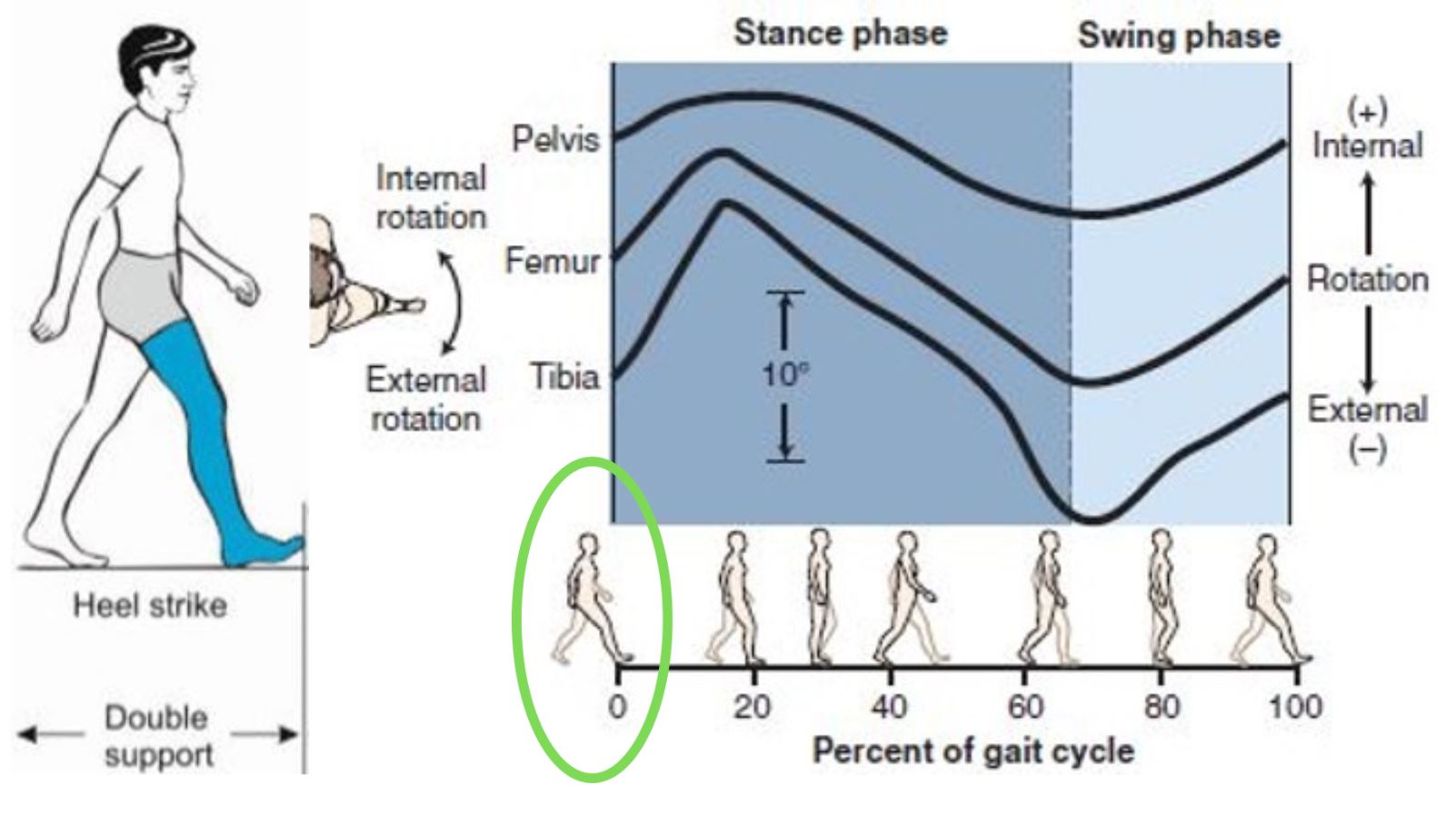 Upon mid-stance the ribcage needs to expand posteriorly and remain relatively “back” so that we don’t rotate our trunks to the other side too early and limit hip extension and push-off.

As we move into mid-stance, the arm becomes more in-line with the body as the chest wall compresses to help swing that arm forward.

At this point, the pelvis and scapula are in a position of internal rotation and the arm is more in-line with the trunk. 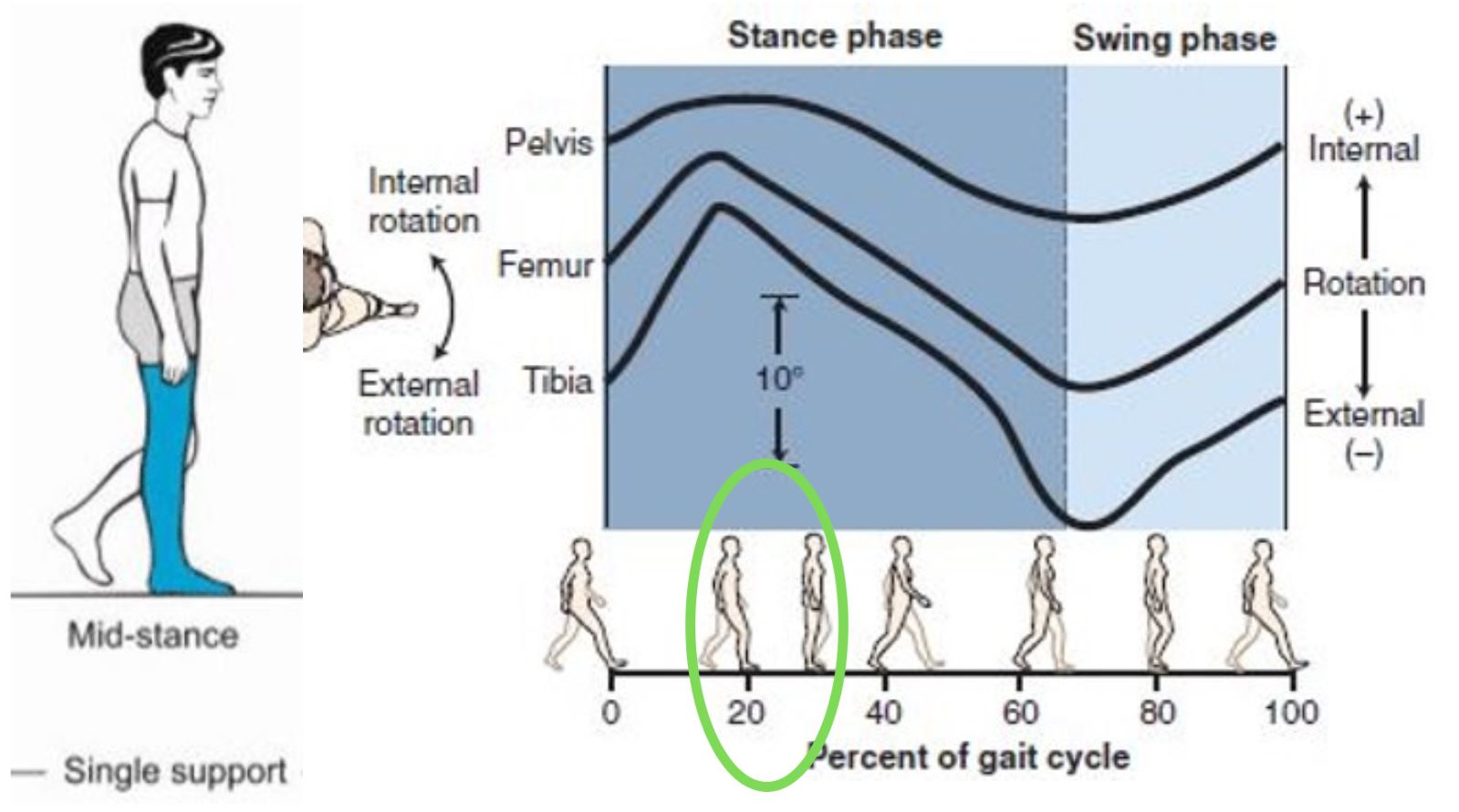 The final portion of the stance phase of gait is push-off, where our heel leaves the ground and we move back towards external rotation. The arm is now coming forward on that side of the body as the hip (hopefully) extends around INSERT NUMBER degrees behind the body.

We still need posterior expansion and a slight “delay” at this point in the posterior ribcage to allow for the arm to come forward and so we can extend the stance-side hip. The chest wall on that side is now maximally compressing, or internally rotating, to help bring the arm forward. 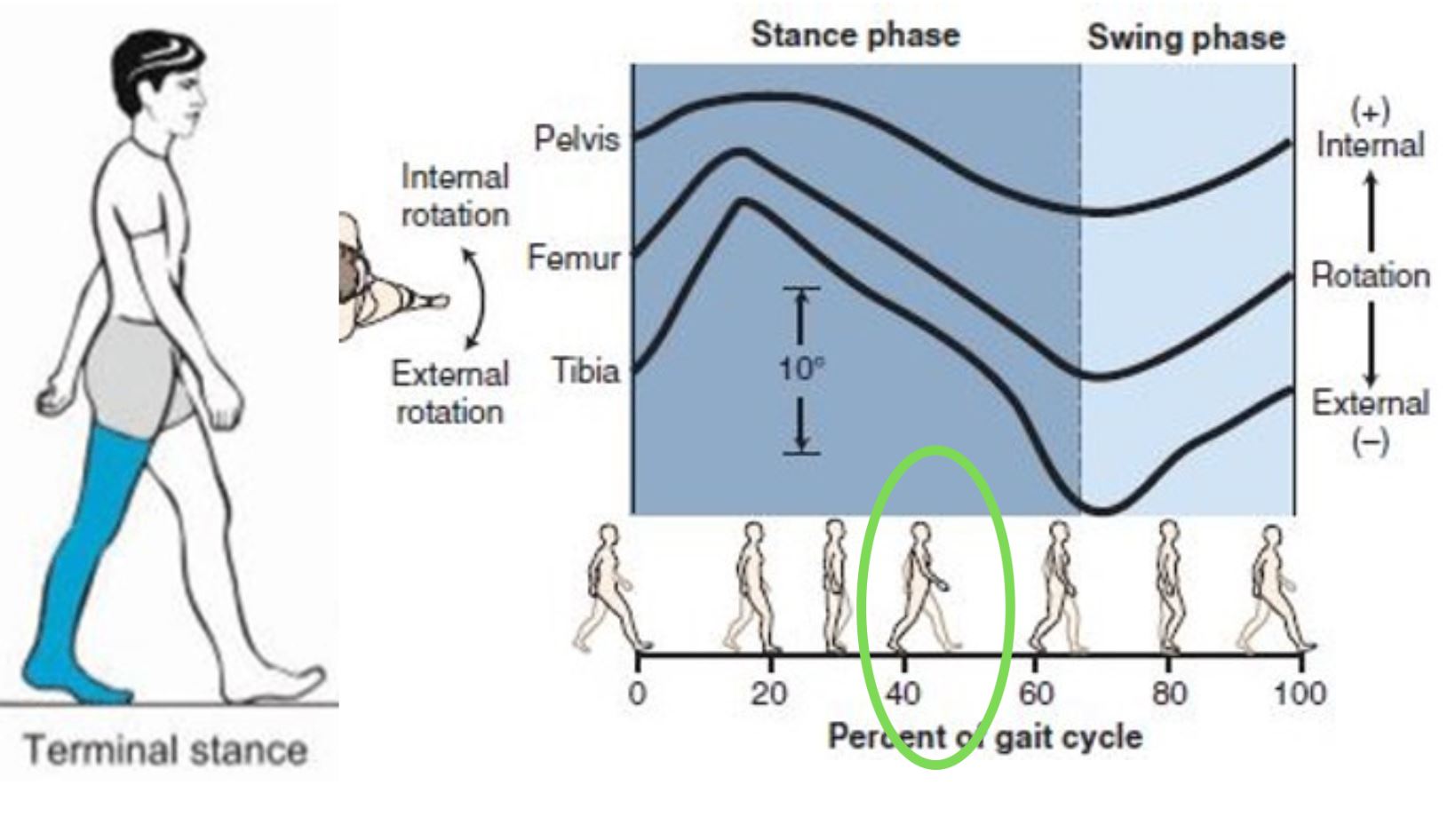 However, if arm swing is limited, then we will not be able to rotate our trunks in the direction of the next step as effectively. Subsequently, the hip will not be able to extend fully and the foot will leave the ground early which can have a several potentially problematic biomechanical issues in of itself, but that’s a different story for a different day.

This concept is massively important becasue gait is not actually that much of a "muscular" strategy, meaning muscles aren't actively contracting and relaxing as much as most people think. In fact, it really is significantly driven by momentum, meaning that we are utilizing hip extenion, arm swing, and the transition of joint actions to help us "fall and catch" ourselves through the gait cycle: 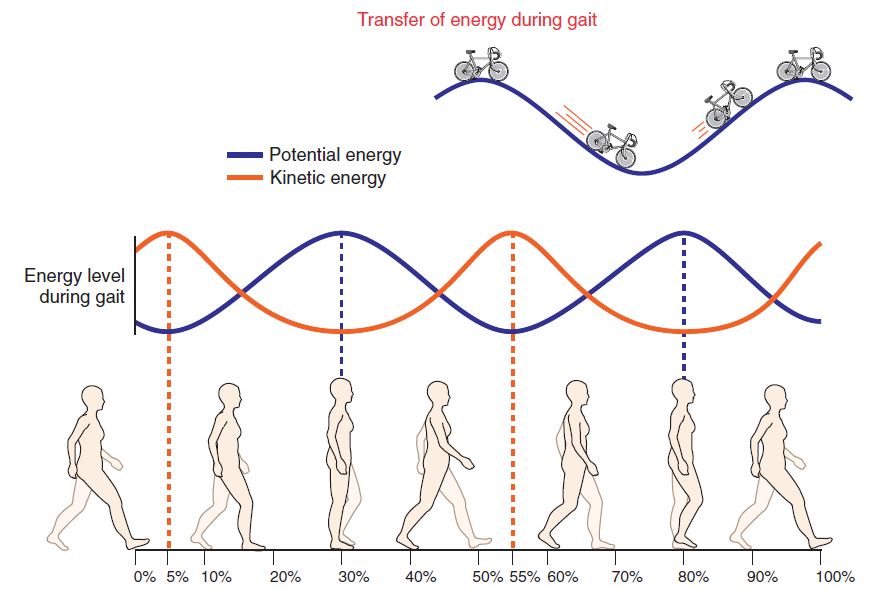 The main point is that arm swing is hip extension, and vice versa. We cannot have one without the other in human locomotion.

Visual Influences on the Gait Cycle

Now let’s get into the nitty-gritty.

Our visual system is a very, very underappreciated player in this concept.

Once the arm comes forward, peripheral vision (basically your visual field minus what you are directly focusing on) sees that forearm and palm, which gives our brain a sense of “space” on that side of our body (Patla, 1996; Hruska, 2021).

This is incredibly important for us to be able to feel “grounded” on that side of the body as we extend the hip behind us. If the arm does not swing forward enough, not only are unable to have that arm help “push” our bodyweight forward and on to the other side, we will inherently feel more unstable on that side of our body.

As per Postural Restoration Institute in the Forward Locomotor Movement course:

"Alternation of arm awareness during the gait cycle and especially during the ground phase is necessary for the visual cortex to 'tell' the body to move forward as the corresponding lower extremitiy (leg) moves back."

To know that we are moving forward in the gait cycle, our visual system needs to sense things moving "back" behind us. This gives us an impression and sense of our body moving forward in space which allows us to effectively make ground contact in early stance:

"Lack of peripheral visual awareness at heel contact results in calcaneus instabilty and promotes overuse of the rectus femoris (quad muscle) for strategic proximal, compensatory control at the hip. This results in unwanted, poorly controlled acceleration at the trunk."

The point is, we need to have access to the peripheral vison of the stance-side leg and awareness of the arm swing in late stance if we are to effectively shift from side-to-side.

You may need to open up the space for this arm swing to happen via improving the ability for your trunk to rotate, but the opening line of this article is the key.

I would rather you have the ability to access this arm swing without you having to think about it consciously. This will lead to more long-term benefits and better movement over time.

If you find your arm swing is limited, it’s very likely that you can’t expand or compress either your front of back ribcage as needed. The following exercises can help with that:

Assuming the arms can swing, we can help integrate the visual system into this while training that “delay” strategy we need in both the hips and ribcage in stance phase of gait.

Due to the natural asymmetries of the body, in the Left AIC pattern that underlies us all (more on that here), often times we struggle more with this “delay” of the stance leg pelvis and ribcage on the left side, which consequently means that the left peripheral visual field is also more limited in the ability to sense that left forward arm swing.

Some people will need work on both sides, but most people need it especially on the left.

What About Running Mechanics?

While running and walking do share many qualities in common, they are not the same. As touched on above, the name of the game in all things human locomotion is conversation of energy.

Gait is more momentum-driven, while running is is more muscularly driven. We want just the right amount of arm swing for running. Therefore, excessive arm swing can actually be detrimental to distance runners because it requires more muscular energy. Research suggests (Williams & Cavanaugh, 1987; Bennett et. al, 1987) that the most econimical runners keep the torso relaxed and have lower amplitude arm movements.

This isn't to say there is no arm swing, but it does mean there isn't as much because we are utilizing more musclar action for propulsion and hip extension rather than "falling and catching" ourselves.

The point is, running is a bit of a different beast than just standard walking, but maybe that's another topic for another article.

Vision plays a massively important role in helping us control & maintain proper biomechanics and momentum during upright movement - particularly walking. To improve gait mechanics, it can be as simple as simply swinging our arms more, but it's not always that easy. Often times a comprehensive approach is necessary, but hopefully this helps open your eyes to how important vision is to arm swing, and how important arm swing is to gait mechanics.