Easy Exercises to Improve Squat Depth: The Secret Behind Getting Deep 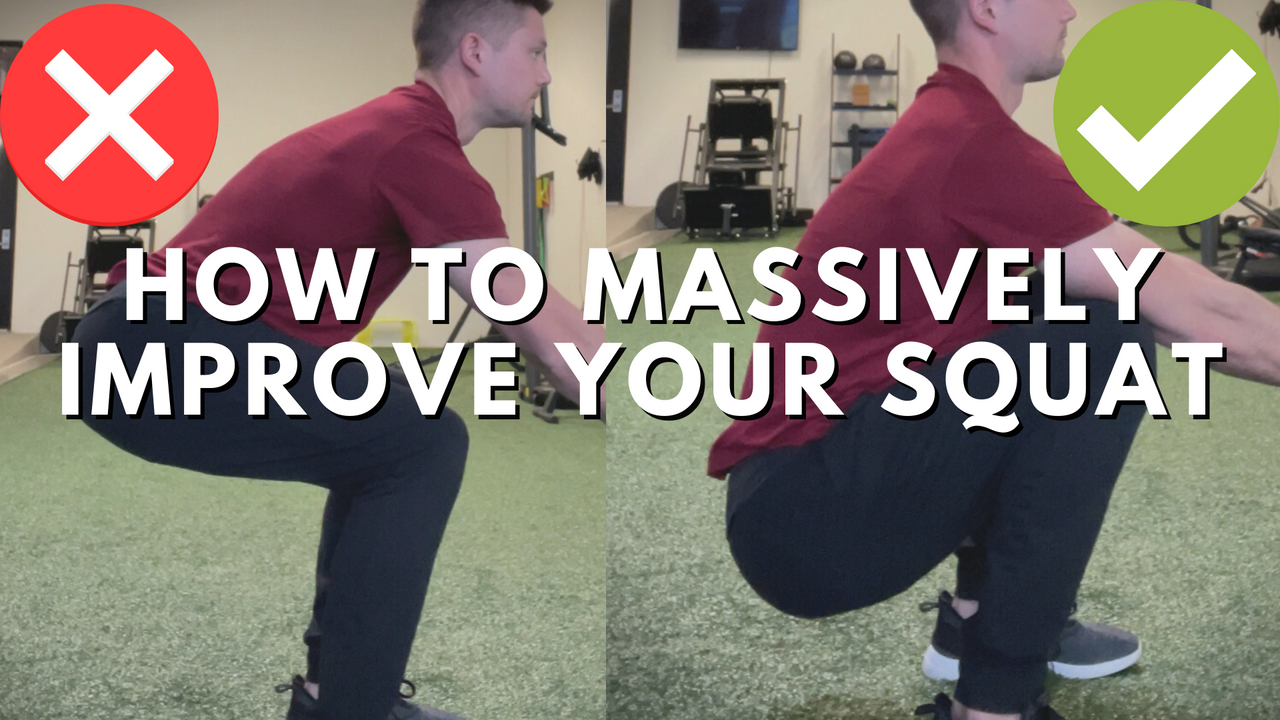 To improve squat depth, it's important to understand the mechanics of what joint ranges of motion we need.

The squat is a measurement of the hips' ability to go through their full range of motion. A good squat usually means the individual can generally access the joint ranges of motion available at the pelvis and femurs.

If you'd rather watch than read, see below:

The squat is a measurement of the hip’s ability to go through their full range of motion. A good squat usually means the individual can generally access the joint ranges of motion available at the pelvis and femurs.

BIOMECHANICS OF THE SQUAT

The squat has three phases. I will break it up into sections of "Hip Flexion", meaning how much bend is in your hips at a given phase of the squat.

This first portion of a squat is biased to external rotation (ER) of the pelvis and counternutation of the sacrum bone.

What this image is showing is that the sacrum the tipping backward into counternutation (or extension) creates a need for the pelvic innominate bones to move forward into flexion, abduction, and external rotation relative to the sacrum  so that the pelvis can maintain an even center of gravity over your foot as you descend into the squat.

The foot is going to be in more of a supinated and externally rotated position as well, which will naturally keep more weight on the rearfoot (however the forefoot should remain flat).

60 to about 90-100 degrees of hip flexion is where we begin to become more "parallel" with the floor in our thighs. This means that we need to move into more of an internally rotated position of the pelvis.

The sacrum is going to move forward which will cause a need for the pelvic innominate bones to rotate relatively backward (extension and internal rotation) to once again keep the weight over the foot without falling too far forward or backward.

This internal rotation is necessary for producing force through the sticking point of a squat. When someone is lacking proper internal rotation of the hips or effectively push the sacrum forward (nutate), you’ll often see them push their low back forward as a substitution for that as a compensation:

This anterior pelvic tilt allows the femurs to pick up internal rotation, but if taken too far, can put increased stress on the low back. Also, trainees who are missing IR of the hips often “fall through” or drop without control into the bottom of a squat as they create a strategy to bypass IR.

As the above images suggest, the foot is going to be in a more pronated position, which is required for achieving dorsiflexion of the ankle:

After we break parallel, we start to need to re-access pelvic external rotation and counter-nutation of the sacrum.

The reason why I say “ish” is because people have varying hip anatomy and there is about a +/- 15 degree difference between individuals when they need to find that counternutation again.

This is why people who can squat deep comfortably often have a flat back. The sacrum tips back which influences the entire position of the spine above it.

If they can’t get the relative motion of their sacrum and pelvis to occur, then they will probably go into a “butt-wink” where the pelvis as an entire unit rolls backward and under them.

The pelvis trying to find that counternutation.

In my opinion, this is actually more important than more ankle mobility, which is traditionally what people think is the problem when someone can't squat deep.

If the pelvis is moving towards external rotation, that means the foot is going to relatively move into more supination and plantar flexion as well. This is often why we see people's ankles move backward upon getting into the deepest part of a squat. They need less dorsiflexion at that point.

We now know that in order to get into a deep squat, we need pelvic external rotation and sacral counternutation.

This will be very hard to accomplish if we are stuck in an anterior pelvic tilt and/or are missing those joint actions.

We can start in a position on the floor which will allow us to regain a neutral pelvic position. Because anterior pelvic tilt is a position of hip flexion, we want to improve hip extension. We can do that with exercises such as below, while also working to improve genuine hip flexion on the opposite side. Two birds with one stone:

After that, we can begin to get more upright and dynamic. We can use a higher elevation and split stance position to bias deep levels of hip flexion we worked into on the ground. A nice starting variation could be:

In addition to above, I am a big fan of a Jefferson Split Squat in a front-foot elevated position where they are biasing high levels of hip flexion. The load in between the legs helps bias our pelvis on the front leg to be in more external rotation.

Try 2-3 sets of 15 reps each side and then follow it up with loaded squat where you can then “own” that new range of motion.

I recommend a heels-elevated respiratory squat, as the elevation helps bias our pelvis towards external rotation and foot towards supination/plantar flexion which allows for a deeper squat:

Yes, this is totally okay as long as you’re keeping your whole foot evenly distributed with your bodyweight.

The "zercher" position will also allow for you to keep your "stacked" ribcage over a neutral pelvis to train yourself to maintain a good squat pattern and positioning throughout the movement. The anterior (front-side) load provides a counterbalance to allow you to do exactly that! Just be sure to go relatively light - even 15-20 lbs in each hand cooked both of us when we filmed this! You should feel a good amount of abs and no low back.

The band (if the knees are kept in-line with the toes) allows for us to bias a little bit of external rotation as well. Please do not jam your knees outside your toes. This will do the opposite of what you want to accomplish as you’ll be tightening your glutes which need to lengthen as you get deep into a squat.

Yes, this is totally okay as long as you’re keeping your whole foot evenly distributed with your bodyweight.

Give this 2 sets of 15 reps getting as deep as you comfortably can without pain, compensation, or pushing your hips back.

Then go do your main squat (back squat, front squat, SSB, etc) and see what happens.

If you want to learn more, we cover this extensively with many more examples & specific exercise selection in the Biomechanics Program!