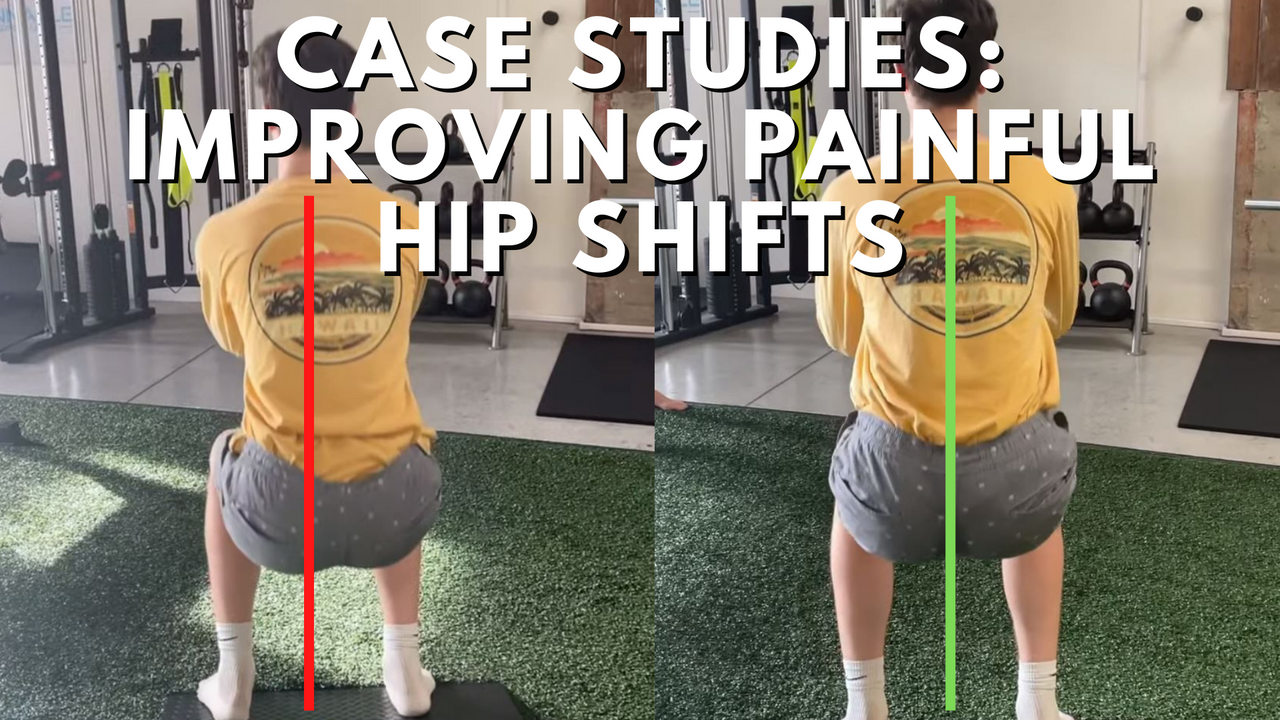 I work with a lot of clients who experience all different kinds of single-sided back, knee, and even ankle issues.

The commonality they tend to share is that they are not evenly distributing the yielding or production of force on both sides of their body (to the extent they need to).

A hip shift in a squat (or deadlift) is not inherently a problem that needs to be addressed. However, when there is discomfort present, it absolutely needs consideration.

Here is one athlete I train who is a college basketball player.

Here are some of the most relevant assessment measures that we had (all numbers are in degrees):

This indicates he can get deeper into a squat on the left side.

This indicates he can push out of his right side better in the most difficult portion of a squat.

This confirms that his femurs (legs) can access better internal rotation on the right, similar to his pelvis.

This confirms that his femurs (legs) can access better internal rotation on the right, similar to his pelvis.

Shoulder Flexion (overhead mobility - a measurements of generally how tight someone's back is):

This indicates his left back is more compressed and tight than his right. Less shoulder flexion usually indicates a tighter back because there is limited ability for the scapula to rotate on the ribs due to that tightness present.

Given these measures (among others), it was clear he had an underlying Left AIC presentation.

In order to lift all the weight needs to for the adaptations we are seeking, his body will sure find a way to internally rotate.

For him, this meant extending his low back on the left more than the right. This results in him being able to point his hip socket down at the ground so he can push force into the floor.

However, the consequence is that he will be using his left low back for most of the work, and it will create an asymmetrical pelvis at the point at which he needs to find internal rotation, which is usually the “sticking point” of a squat (parallel).

So what did we do?

We want to help pull his pelvis back on the left with the hamstring and abs. These two muscle groups help him own the "sagittal plane" of his pelvis so that we can begin to address more frontal plane muscles after that.

This is one of the exercises I had him start with, and I had him do one set.

Now we needed to improve the more "frontal and transverse plane" influences on his back pain. Giving him genuine left hip internal rotation is key.

We want him to learn to shift left without going into excessive anterior pelvic tilt to do so.

This drill will also help him integrate left obliques + transverse abs we helped him find in the previous exercise.

Internal rotation in the pelvis is maximized around 60-100 degrees of hip flexion.

Because the elevation biases him into a position where he has a bit more hip flexion on this side, we can train more genuine internal rotation.

We had him do these drills in this specific order for 2 sets in the morning or prior to training, and 1-2 sets at night or post-training,

The result? Pain free and much better symmetry.

You can see it here.

Here is one coach in my Biomechanics Program who was experiencing significant left back pain, but this time with a left hip shift.

Even worse, he’s a powerlifter who had a meet in less than three weeks. Yikes!

Unfortunately we do not have a video of his initial hip shift, but from his accounts, it was significant and uncomfortable, preventing him from training: 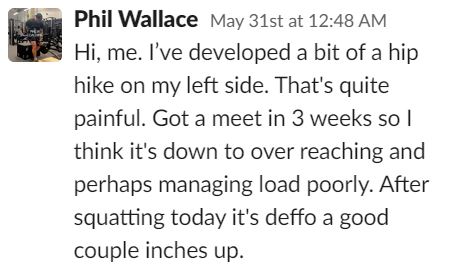 We found that he has an overall forward pelvis orientation (anterior pelvic tilt). This means that his pelvis is forward on both sides, but more on the left. I know this because the more someone compensates into anterior pelvic tilt, the more they will lose hip flexion, shoulder flexion, and overall range of motion of their pelvis.

We know his measurements showed a significant limitation in left internal rotation, similarly to above. So why does he shift left rather than right?

Well, we will move into space where we have room to do so in a squat. In the Left AIC pattern, the pelvis is more forward on the left.

If the left pelvis continues to compensate forward, it will pull the right side forward with it (anterior pelvic tilt once again), but now we will have a significant rightward-facing pelvis.

Now imagine that this pelvic orientation is your new "normal" and straight-ahead. If you move straight back, your hips will actually move left and you can visualize that here.

Because he’s a Powerlifter, his pelvis is pushed forward on both sides (anterior pelvic tilt) quite a bit, so we need to help him find a more neutral pelvis on both sides before addressing asymmetry. I actually just released a video and article specific to Powerlifters here.

This is one of the exercises I had him start with, and I had him do one set of the offset reach on both sides.

Following that and another drill, we now had a more neutral pelvis to work on that wasn’t as forward. I’ll never be able to take him fully out of extension/anterior tilt, nor would I want to because it helps him be strong in his task. But relatively speaking, we brought him back because his hip flexion and straight leg raise improved.

Now we needed to improve the more asymmetrical influences on his back pain. Giving him left hip internal rotation is key.

Initially we couldn't get him to improve internal rotation with a basic exercise:

When this fails, often times that means there is a restriction in the back of the hip socket preventing the hip from moving into full internal rotation:

So we had him start with a posterior hip capsule stretch to open up the space for his femur to be able to push back into the socket, as we concluded that he wasn’t going to be able to do that on his own without really opening up that space first:

His third and final drill was to push out of the right side to help move the hips back on the left and square them up. Imagine the right glute pushing the left pelvis forward like so in this video.

Here is the exercise that helps train that:

We had him do these drills in this specific order for 2 sets in the morning or prior to training, and 1-2 sets at night or post-training,

The result? You can see it here: 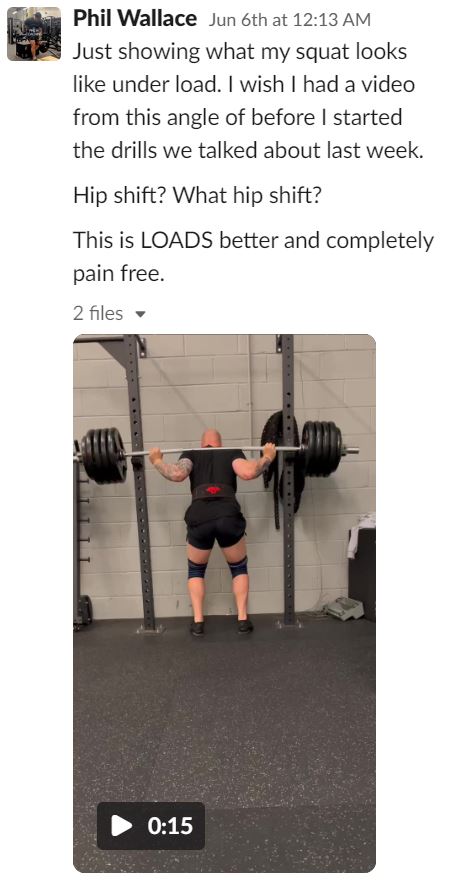 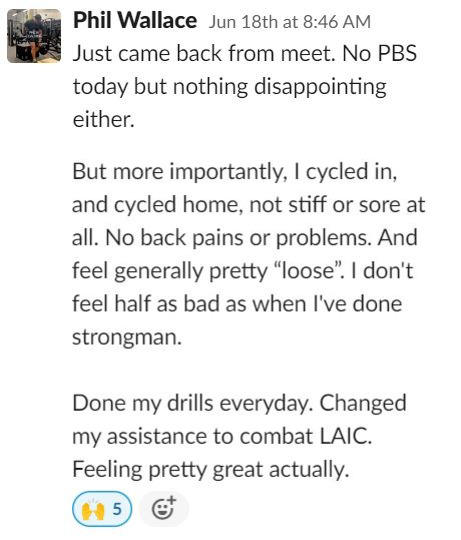