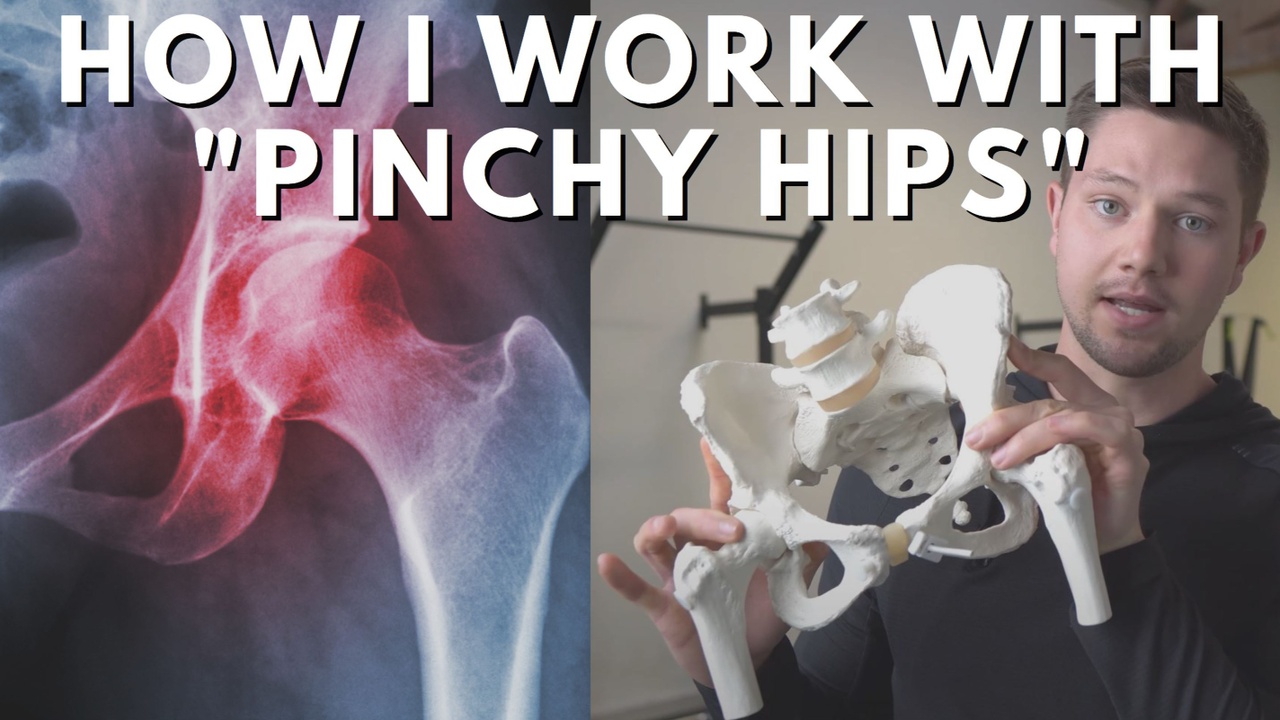 Femoral acetabular impingement of the hip is no fun, but if you or a client of yours is experiencing this issue, fear not - there is hope.

Before I begin addressing hip impingement, I want to make it clear that if this is a specific diagnosable condition, please be sure to work alongside a qualified physical therapist. Trainers do not have the ability to diagnose and treat pain, but we can program responsible exercises to improve movement. This article is for educational purposes only and is not meant to serve as a means of self-diagnosis.

The information in this post was significantly influenced by my favorite Postural Restoration Institute course: Impingement & Instability.

The Different Types of Hip Impingement

There are obviously so many different iterations of impingement, but for the purposes of simplicity, we can break them down into three main types:

In this type of hip impingement, what we often see is a pelvic innominate bone that is very anteriorly oriented ("anterior pelvic tilt") on the side of the impingement.

In this case we often see this coupled with compression of the posterior (back) side of the pelvis. The reason for this is that because the pelvis is so far forward on that side, the back of the pelvis starts to tighten up to help "pull" the pelvis back, but this actually results in the femur being pushed forward within the acetabulum (hip socket).

Therefore, this impingement will be most apparent when the individual tries to internally rotate the femur via pushing it back within the acetabulum.

The femur will get stuck on the superior (upper) part of the hip socket.

Because the left side of the pelvis is usually more forward than the right (see my content on the Left AIC for more on why), this type of impingement usually happens on the left side.

We will use primarily the following tests to see more objectively determine if this is the case:

In this case, we would often see the following issues:

In this case, the femur is going to be feel "pinchy" (impinged) when it tries to internally rotate, but for a different reason than above.

The femur is going to be restricted going into internal rotation because it is essentially already pushed back in the acetabulum.

The femur is likely already starting in a position of adduction and internal rotation, which biases it towards a position where it is posteriorly rotated.

More internal rotation creates the impingement sensation because "you can't get somewhere you're trying to go if you're already there".

In this case, we would expect to see:

This type of impingement occurs when the individual attempts to create abduction of the leg.

Usually the femur is oriented into internal rotation relative to the other side, but both sides of the pelvis are anteriorly oriented.

This is most common in an oblique orientation of the pelvis (see my lateral pelvic tilt content here for more on that). 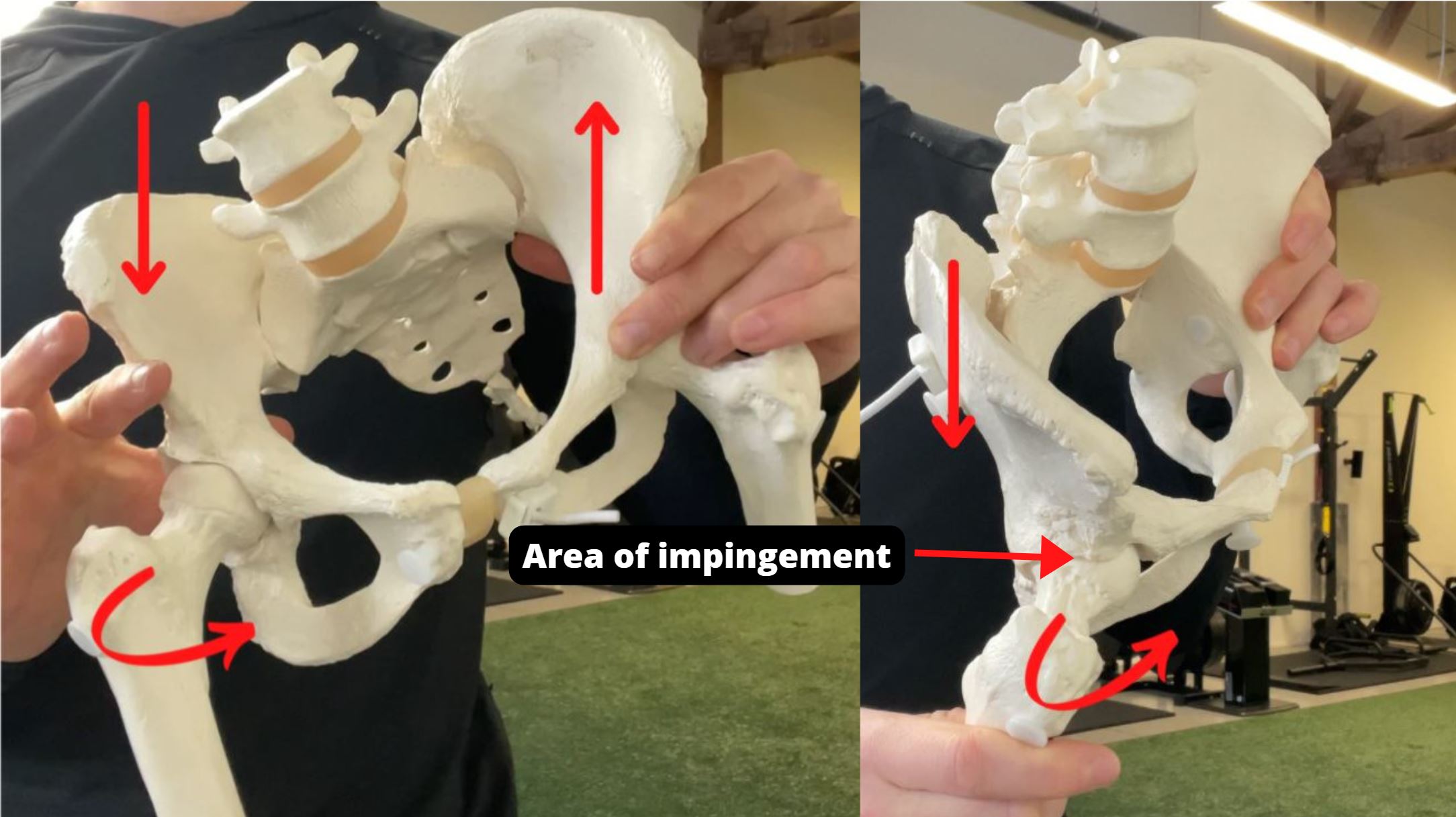 We will add another test to this because it is most common in abduction of the pelvis on that side (usually the right side):

Here are some exercises that can help improve movement quality so that dynamic activities such as gait and weightroom training can become easier. I will address each of the following types as presented in the order above:

The goal with this is to get the femur to be able to slide back within the acetabulum and get the pelvis to access more genuine hip internal rotation. The following exercises are presented in order of difficulty:

In this context, the opposite side of the hip usually has limited internal rotation, so we can improve that as well to restore more overall neutrality to the pelvis:

Here it is best to create more external rotation through the affected side (usually the right), via the glute max, but also with an emphasis on creating genuine abduction capabilities, as that is where the issue primarily lies:

If you're looking for more strategies to improve movement to help your clients feel great, check out my free webinar: 5 Strategies To Help Your Clients Feel 85% Better Immediately

These are the most common types of hip impingement we see as they relate to natural human asymmetrical patterns. Usually the problem is that the femur is being pushed into a certain position because the position of the pelvis as a whole (both sides included) are creating an orientation of the hips that shift the femur in that specific position.

The femur will then struggle to move into a position outside of that orientation (or be limited in moving further into it), which results in that femur being jammed on a specific part of the acetabulum.

If you are experiencing these issues, first see a qualified Physical Therapist who appreciates how asymmetry can affect hip impingement. Please do not try to self-diagnose.